Juan Rodrigues Cabrillo was the first European explorer to sail to San Diego shores where the Native Kumeyaay lived for thousands of years. In 1769, Gaspar de Portolà established the Fort Presidio of San Diego above the Old Town of San Diego. Almost at the same time, Mission San Diego de Alcalá was fist mission to be founded in Alta California by the Franciscan fathers lead by el Padre Junípero Serra. There are 21 missions in the State of California today. Learn more about California missions 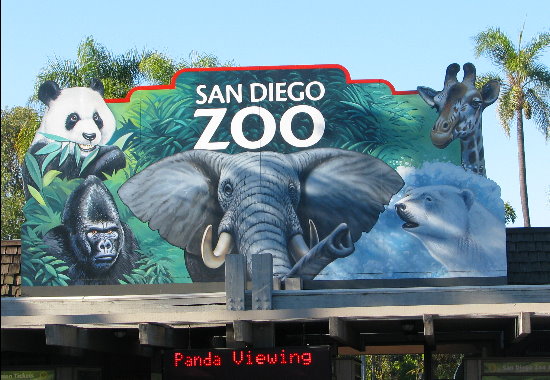 Thanks to its perfect geographical location between the US and Mexico, San Diego enjoys a mild, Mediterranean and mostly dry and plenty of sunshine throughout the year with 264 sunshine days annually.

San Diego’s Best Attraction in the San Diego Metropolitan Area include the following:

B Street Pier
B Street Pier where catamaran set up their trips to Catalina.Cruise Ships from all over the word make B street Pier in San Diego their popular destination for vacation.

Balboa Park
Balboa Park is a landmark in Las Vegas where you can admire museums, unique architecture of San Diego monuments located within Balboa Park. Don’t miss the world famous

San Diego Zoo and its unique Panda,the Botanical Garden Building, the Japanese Friendship Garden, and the San Diego Aerospace Museum where there’s a replica of Lindbergh’s Spirit of St. Louis.

Belmont Park
A wooden roller coaster, a carousel and a 175-foot long indoor swimming pool are part of this Oceanside amusement park’s allure

Mission Bay
Admission is free and kite-flying is hot at this breezy 4,600-acre aquatic park (with 75 percent on public land) that includes 27 miles of bay front beach and 17 miles of ocean frontage. In 1542, Portuguese explorer Juan Rodriguez Cabrillo called it “Baja Falso” after the ocean-facing inlet lured him into discouraging swampland. In the 1960s, the city dredged to build a monumental man-made bay with vast stretches of beaches and lawns for picnics and recreation, and resort hotels dotting the

Old Town San Diego
San Diego is one of the oldest towns in California characterized by its Hispanic-Mexican architecture. Its a hub for visitors from all over the world! The open market down town San Diego is highly recommended.

San Diego Zoo
San Diego Zoo is famous all over the word thanks to its unique and exotic mammals including the famous Pandas. San Diego Zoo is home to more than 4,000 rare and endangered animals representing more than 798 species. The San Diego Zoo is a world famous conservation Park-Zoo where visitors can picture unique animals in habitat environments. In San Diego Zoo travelers and visitors may photograph the rare giant pandas, cuddly looking koalas, reptiles of various shapes and sizes and many more interesting species. For Pandas lovers, be in the Zoo in the morning as they take them out only between 10 AM & 12 PM. Check this out with San Diego Zoo as they change their schedule accordingly. Zoo Drive in Balboa Park.
Phone (619) 234-3153